Legendary Nigerian singer, Femi Kuti, has received a brand new car from his family and friends a month after turning 60.

The Afrobeat legend turned 60 in June while he was on a music tour and couldn’t celebrate with his loved ones. 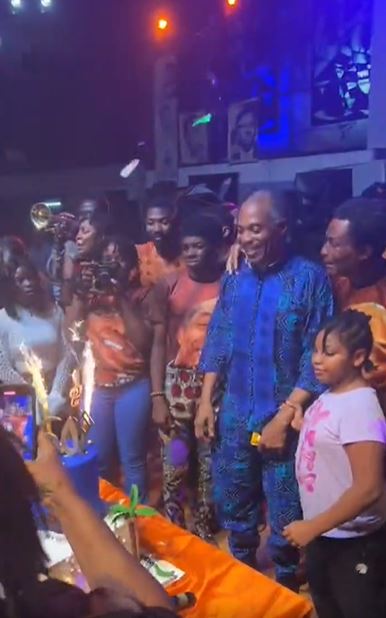 However, Femi Kuti was warmly welcomed by his family, friends, and fans, who organized a surprise birthday for him on his return to Nigeria and gifted him a brand new car.

Adorable moments from the welcome/birthday party, including the moment he was presented with the new whip, have been shared online by his sister, Yeni Kuti.

Presenting the car to him, Femi’s sister, Yeni said “We have missed you, you have been away for so long, so we all planned the surprise for you. This is the official handover of your birthday present”.

In the video, Femi Kuti also paid homage to his late father, Fela Anikulapo Kuti’s, grave for a successful tour.

Sharing the video on Instagram, Yeni wrote, “Welcome back the King of Afrobeat”.

A while ago, the first son of Afrobeat legend, Fela Anikulapo Kuti, disclosed that he wants to be cremated when he dies.

According to him, he doesn’t want a loud burial ceremony but wants a small ceremony with only his close friends and family members in attendance.

The 59-year-old Afrobeat maestro made this disclosure during his recent performance at the New Africa Shrine. He emphasized that he wants his body cremated, instead of being buried at Ikoyi cemetery.

Explaining why, the singer said,

“When I d!e, please cremate me, b#rn my body. It is the most hygienic way. Have you all thought about Ikoyi cemetery, this Lagos has been in existence for let’s just say 60 years and people d!e, if they don’t d!e today, they will d!e tomorrow and that burial ground has never been full and if you check it, it is not like it’s 1 million acres since I was little when we used to bury people there.”